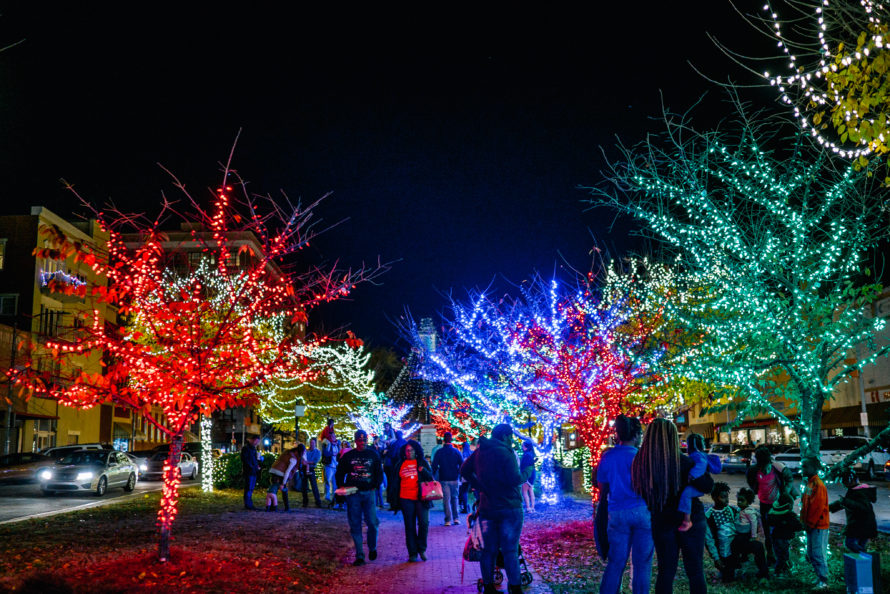 Learn more about the beginning of one of your favorite Macon holiday traditions!

The Main Street Christmas Light Extravaganza has quickly become one of the most treasured annual events that occurs in #DTMac, but how much do you know about how this Extravaganza began? We went behind the scenes with Bryan Nichols, the mastermind behind the light show, to tell you how your favorite tradition got started.

The idea came when Bryan was on the Main Street Macon board brainstorming ways to create a reason for people to adventure downtown from Macon and from surrounding communities. Around this time, Bryan heard many community members talk about how they were willing to drive out of town to look at Christmas lights and that they wished more Christmas decorations were downtown. This inspired Bryan to research towns that were known for Christmas decorations. He noticed most of these places put some lights on buildings or trees, but these missed the “wow factor” he was actively looking for. After seeing some videos of lights on houses synchronized to music, Bryan was inspired to try something never done before: he would sync locally arranged and produced music to lights along city blocks.

The Main Street Christmas Light Extravaganza was made possible through the Downtown Challenge Fund of the Community Foundation of Central Georgia. A series of four grants were awarded that made the light show possible and enhanced the overall Christmas experience.

Main Street Macon was awarded a grant in March of 2016 to enhance the annual street fair “Christmas on First Street.”

Bryan Nichols received a grant in March of 2016 that helped him transform Poplar Street into a holiday attraction with Christmas lights and locally arranged and produced music by Macon Pops for the first time.

In March of 2017, another grant was given to install infrastructure along Poplar Street, ensuring the Extravaganza would continue.

To expand the Extravaganza from two city blocks to four and a half, another grant was awarded by the Downtown Challenge in March of 2018.

NewTown Macon recently received a grant to position Macon as the number one holiday destination in the Southeast.

City blocks lit up and synced to music had never been done before Bryan started the Main Street Christmas Light Extravaganza. Every year, there has been a different challenge to overcome. The process has been “figuring it out as you go,” so much so that on the first opening night, Bryan had never even seen the show. He saw it for the first time as everyone else, hoping that it was going to work. This year, there were still things to figure out: Bryan used a new software that required custom-built controllers Bryan engineered. Additionally, Macon Pops performed a LIVE concert featuring a 40 piece orchestra with lights synched in real time to originally produced music featuring local artists on opening night.

The light show normally takes around two months to set up and one month to break down. This year will look different as Bryan and his team have more experience and now have around 14,000 feet of cable infrastructure in the ground. They are already planning on how they will add songs to the show and how they will find funding.

The Most Rewarding Part: Community

When asked about what is most rewarding about the hours upon hours that go into making the Main Street Christmas Light Extravaganza, Bryan spoke of the community building that occurs every year. “All the things that people find ways to divide us, there is none of that out there,” said Bryan. Every night of the show he gets to witness “the community come together, watching the kids’ faces, and the families taking the family photographs and making memories.” The Main Street Christmas Light Extravaganza has created a place for people to come to at every stage of their lives. Bryan is rewarded with the knowledge that he is “establishing a tradition for thousands of people for years and years to come, which creates an environment for them to spend, not just with their kids now, but with their grandkids. And then their kids are experiencing it with their kids. And trying to bring back the tradition of people coming downtown to enjoy Christmas down here.”